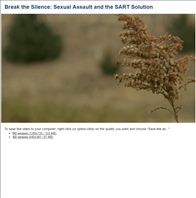 Break the Silence: Sexual Assault and the SART Solution

The video opens with sexual assault victims individually expressing feelings about their victimization, including their anxiety about reporting it to the police because of family pressures, concern that they won't be believed, shame, self-blame, and uncertainty about what will happen in the unfamiliar arena of the criminal justice system. In first presenting this background of victims' psychological reactions to their victimization and concerns about reporting it, the rationale for SARTs is made clear. A SART is a multidisciplinary team composed of representatives from the police, the prosecutor's office, victim services, the sexual assault nurse examiner, and forensic investigators. The functions of a SART as outlined in the video are to ensure that victim needs are identified and met, the offender is held accountable based on evidence properly collected, and the victim is protected from further harm. Interactions between SART caseworkers and sexual assault victims portray sensitive responses to victim concerns and practical advice on case processing and the supports available. The video's narrator advises that in jurisdictions with SARTs, the reporting of sexual assaults by victims is greater than in jurisdictions without SARTs, and the percentage of successful prosecutions is greater. Guidance is provided on accessing resources for establishing a SART.

The White House Task Force to Protect Students from Sexual Assault (the Task Force) is working to assist institutions of higher education (IHE) and law enforcement agencies as they develop strategies and tools to address the serious issue of sexual violence in higher education.

Sexual assault response teams (SARTs) are multidisciplinary, interagency teams that promote collaboration to support victims of sexual assault and hold offenders accountable. SARTs began forming in the United States more than 30 years ago and continue to form across the country as needed. The SART Toolkit is designed to support SARTs in all aspects of their work, including practical tips for effective teamwork, ideas for expansion, tools for identifying what is most important in each community, best practices, and connections to technical assistance providers to guide development and improvement.

Many jurisdictions across the country are looking at the issue of sexual assault evidence that has not been submitted to a crime lab for testing. As part of an NIJ-supported project, the Wayne County (Detroit), Mich., Prosecutor's Office formed a multidisciplinary team to address the issue. On the team were practitioners who deal with sexual assaults every day — police officers, crime lab analysts, prosecutors and victim advocates — as well as social science researchers from Michigan State University (MSU). The MSU researchers were led by Rebecca Campbell, Ph.D., a nationally recognized expert on sexual assault. Dr. Campbell's work with the Detroit multidisciplinary team followed an "action-research" model. First, the team worked collaboratively to understand the scope of the issue: How many sexual assault kits (SAKs) in police custody had never been sent to a crime lab for testing, and how and why did the problem develop? Then, the team identified effective, sustainable responses. One such response was developing a plan for testing a large number of previously untested kits. Here are 14 lessons that the team learned in the Detroit project.

Sexual Violence encompasses a variety of criminal, and some noncriminal, acts—from sexual threats to unwanted contact to rape. Highly underreported because of the stigma associated with these crimes, sexual violence is also difficult to measure because of inconsistent definitions of sexual assault and rape; differing reporting requirements to local, state, and national law enforcement; and low conviction rates. Sexual violence, however, remains pervasive and traumatizing to its victims. While both men and women can be victims of sexual violence, most of these acts are perpetrated by male offenders against female victims. Most of the offenders are known to the victim in some capacity, including as friends, acquaintances, family members, or intimate partners.

This forum focuses on emerging techniques and developments associated with evidence collection training; evidence analysis utilizing Y-STR capabilities; and victim-centric care approaches (e.g., understanding the neurobiology of the victim in sexual assault). Presentations in this forum discuss development of best practices for resolving issues related to sexual assault and showcase emerging technologies associated with the collection and analysis of sexual assault evidence. The forum presenters include researchers, practitioners, and stakeholders who are thoroughly involved in the development and implementation of policies that address these topics.

This training is intended for law enforcement officers, SAFE/SANE medical personnel, and victim advocates to help strengthen collaboration in a team response, from the initial crime scene to prosecution of sexual assault cases. During the training participants will identify and collect DNA evidence at a simulated crime scene.

This updated, web-based Guide serves as a practical, research-based, trauma-informed source for developing new SANE programs and enhancing and sustaining existing programs across the country.

I AM EVIDENCE: The Movie

I AM EVIDENCE exposes the alarming number of untested rape kits in the United States through a character–driven narrative, bringing much needed attention to the disturbing pattern of how the criminal justice system has historically treated sexual assault survivors. Why is there a rape kit backlog? What can we do to fix the problem? This film explores these questions through survivors’ experiences as they trace the fates of their kits and re-engage in the criminal justice process. I AM EVIDENCE illuminates how the system has impeded justice while also highlighting those who are leading the charge to work through the backlog and pursue long-awaited justice in these cases. In this film, we seek to send a clear message to survivors that they matter, that we as a nation will do everything possible to bring them a path to healing and justice, and that their perpetrators will be held accountable for their crimes.

The Sexual Assault Kit Initiative (SAKI) provides funding through a competitive grant program to support the jurisdictional reform of approaches to sexual assault cases resulting from evidence found in sexual assault kits (SAKs) that have never been submitted to a crime laboratory. SAKI is administered by the Bureau of Justice Assistance (BJA) and aims to create a coordinated community response that ensures just resolution to sexual assault cases through (1) a comprehensive and victim-centered approach, (2) jurisdictional capacity building to prevent high numbers of unsubmitted SAKs in the future, and (3) supporting the investigation and prosecution of cases for which SAKs were previously unsubmitted. 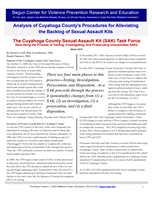 This purpose of this brief is to describe the data, sampling methods, and data limitations of the SAK Pilot Research Project. For more information about the SAK Task Force and its process, see “The Cuyahoga County Sexual Assault Kit Task Force: Describing the Process of Testing, Investigating, and Prosecuting Unsubmitted SAKs” and “The Cuyahoga County Sexual Assault Kits (SAK) Pilot Research Project: Data and Methodology.” The findings from this project are presented in a series of brief reports written by the research team at the Begun Center.

The following guidelines and interview strategies are based upon national best practices regarding sexual assault incident investigations and were developed in collaboration with local, state, and federal law enforcement, prosecutors, advocates, medical, and forensic professionals. The goal of these guidelines is to support officers and departments in preparing sexual assault cases for successful prosecution through detailed case documentation and thorough investigations. 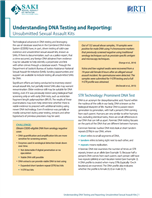 Technological advances in DNA testing and leveraging the use of database searches in the Combined DNA Index System (CODIS) have, in part, driven testing of cold-case evidence and unsubmitted sexual assault kits, known as SAKs. If there is documentation, such as a police report, that a crime occurred, any foreign DNA obtained from evidence may be valuable to help identify a perpetrator and link with other crimes through a database search. Through the Department of Justice’s Bureau of Justice Assistance National Sexual Assault Kit Initiative (SAKI), funding opportunities and support are available to include testing all unsubmitted SAKs for DNA. 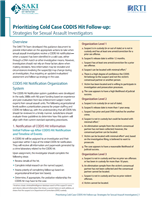 The Sexual Assault Kit Initiative (SAKI) TTA Team developed this guidance document to provide information on the appropriate actions to take when sexual assault investigators receive a CODIS hit notification—when a suspect has been identified in a cold case, either through a DNA match or other investigative means. However, investigators should not rely on these factors alone when making decisions. New information may be revealed and circumstances involving the suspect(s) may change during an investigation, thus requiring an updated evaluation/ assessment and follow-up strategy in the case.

One of the main goals of the testing of unsubmitted sexual assault kits (SAKs) is to enter foreign DNA profiles into the Combined DNA Index Syste m (CODIS) in an attempt to identify the potential perpetrator (s). Maximizing the use of CODIS has been found to have other advantages, such as linking crimes together, helping refute claims, identifying criminal patterns, and decreasing concerns regarding public safety.

Outsourcing DNA testing for projects that require an immediate surge in resources is a great way to use private partners with minimal impact to current crime laboratory initiatives. Larger, private DNA outsourcing laboratories have proven abilities for scaling up production, performing high-throughput testing, and bringing online technology adoptions to continuously improve processes. However, even for laboratories with high-volume experience, the current SAK grant timelines of 2 to 3 years can be demanding. The following five objectives are a guide toward establishing positive partnerships with vendor laboratories for the submission and testing of SAKs. 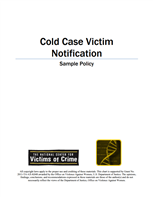 This resource is a sample policy for notifying victims of cold cases of any changes in case status.

The results of this project were influential in creating a number of significant changes in policy and practice, including, but not limited to: a policy change in the local police department to submit all SAKs for forensic testing; training for police and other practitioners on victim-centered, trauma-informed services and offender-focused investigations; securing $4 million from the state Attorney General’s Office to test as many remaining Detroit SAKs as possible; and the passage of new state-wide legislation requiring all law enforcement agencies in the state of Michigan to submit SAKs for testing (if released for testing by the rape victim) (the Sexual Assault Kit Evidence Submission Act (PA 227)). 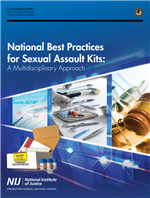 This document’s intent is to identify best practices to assist jurisdictions and organizations in the development of protocols to address issues that arise in the course of working with sexual assault evidence, including timing of sample collection at the point of care; standardizing sample collection methods; transferring evidence between agencies; storing parameters (for location, temperature, and handling); maintaining SAKs, including processes for destruction of SAKs; and enhancing laboratory processes to reduce time between submission and analysis. 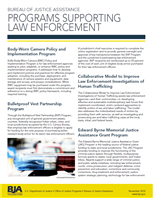