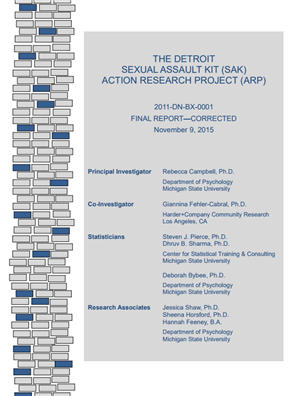 The results of this project were influential in creating a number of significant changes in policy and practice, including, but not limited to: a policy change in the local police department to submit all SAKs for forensic testing; training for police and other practitioners on victim-centered, trauma-informed services and offender-focused investigations; securing $4 million from the state Attorney General’s Office to test as many remaining Detroit SAKs as possible; and the passage of new state-wide legislation requiring all law enforcement agencies in the state of Michigan to submit SAKs for testing (if released for testing by the rape victim) (the Sexual Assault Kit Evidence Submission Act (PA 227)).