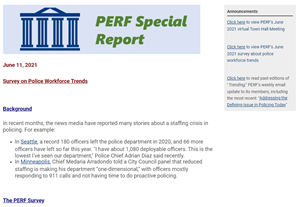 To gauge whether the staffing crisis is a widespread phenomenon or is limited to a small number of departments, PERF fielded a survey of police agencies whose chief executives are PERF members. The survey was conducted from May 10 to May 21, 2021. The survey started by asking the agencies about the following: Their current staffing levels, and their numbers of authorized sworn positions (as opposed to how many of those positions are actually filled). Next, the survey asked for detailed numbers about the numbers of officers who were hired, who resigned, or who retired during the 12-month period of April 1, 2020 -- March 31, 2021. And to learn whether those numbers represented any change from the previous year, we asked for the same numbers for the period April 1, 2019 -- March 31, 2020. PERF received 194 responses to the survey. While not a representative sample of police agencies nationwide, the responses reflected a mix of departments of all sizes, as detailed below.