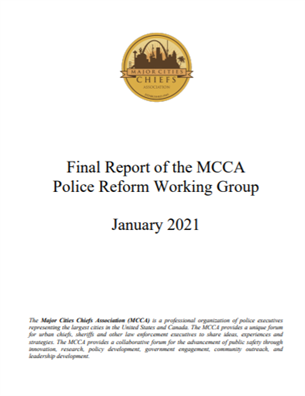 In the aftermath of the tragic death of George Floyd in May 2020, a national discourse on police reform emerged. Legislative bodies and elected officials at every level of government have proposed a myriad of reforms to increase transparency and accountability among law enforcement. The Major Cities Chiefs Association (MCCA) acknowledges that change is needed within the law enforcement profession and has served as a leader in national policy debates on police reform. This report outlines the MCCA’s recommendations to enact meaningful reform, hold law enforcement accountable, and build trust with the community.