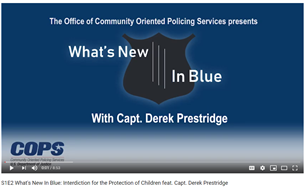 What's New In Blue: Interdiction for the Protection of Children With Capt. Derek Prestridge

The Texas Department of Public Safety established the Interdiction for the Protection of Children (IPC) Program in 2007. The program trains local law enforcement officers to identify and question suspects, during regular patrol stops, who may be trafficking children or involved in child abductions. In 2014, the COPS Office awarded the Texas Department of Public Safety a Microgrant to implement a nationwide train-the-trainer program and it has received numerous accolades from federal, state, and local law enforcement agencies across the country. In this episode, Captain Prestridge speaks about the Interdiction for the Protection of Children project focusing on how the project began, its expansion across the country, and outcomes of the project.