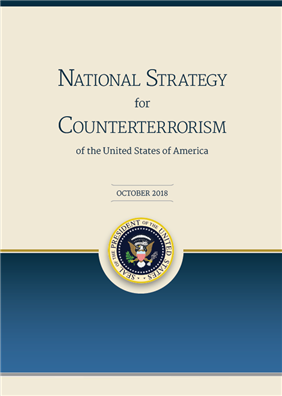 National Strategy for Counterterrorism of the United States of America

The National Strategy for Counterterrorism recognizes the full range of terrorist threats that the United States confronts within and beyond our borders, and emphasizes the use of all elements of national power to combat terrorism and terrorist ideologies. It enhances our emphasis on targeting terrorist networks that threaten the United States and our allies and on disrupting and denying their ability to mobilize, finance, travel, communicate, and inspire new followers. We will deny terrorists the freedom to travel and communicate across international borders, and we will take action to limit their ability to recruit and radicalize online. We will combat the violent, extreme, and twisted ideologies that purport to justify the murder of innocent victims. We will also ensure that America’s critical infrastructure is protected, in order to deter and prevent attacks, and is resilient so that we can quickly recover should it come under attack. This National Strategy for Counterterrorism sets forth a new approach.