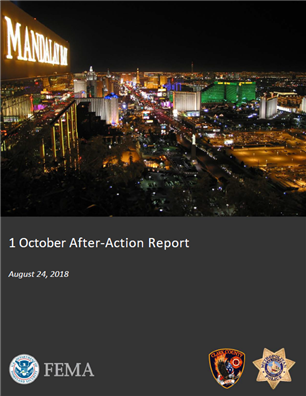 On October 1, 2017 over 22,000 people attended the Route 91 harvest Festival in Las Vegas, Nevada. On the third and final night of the festival, a lone gunman opened fire into the crowd from the 32nd floor of the Mandalay Bay Resort and Casino. The gunfire continued for over ten minutes, resulting in the deaths of 58 people and injuring more than 850, including first responders. Two local police officers responding to the incident were among those wounded by gunfire. This report is intended to assist both Clark County public safety agencies, as well as jurisdictions across the country, to improve their preparedness for incidents of this type.