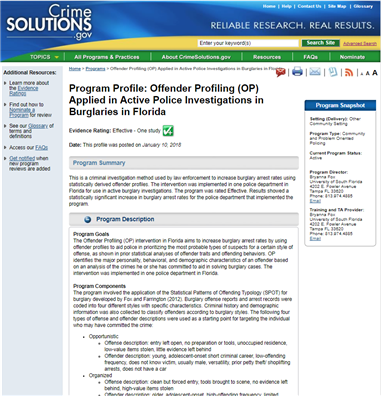 This is a criminal investigation method used by law enforcement to increase burglary arrest rates using statistically derived offender profiles. The intervention was implemented in one police department in Florida for use in active burglary investigations. The program was rated Effective. Results showed a statistically significant increase in burglary arrest rates for the police department that implemented the program. The Offender Profiling (OP) intervention in Florida aims to increase burglary arrest rates by using offender profiles to aid police in prioritizing the most probable types of suspects for a certain style of offense, as shown in prior statistical analyses of offender traits and offending behaviors. OP identifies the major personality, behavioral, and demographic characteristics of an offender based on an analysis of the crimes he or she has committed to aid in solving burglary cases. The intervention was implemented in one police department in Florida.