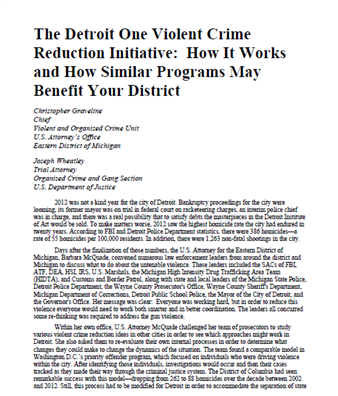 The Detroit One Violent Crime Reduction Initiative: How It Works and How Similar Programs May Benefit Your District

The Initiative had three components: (1) identify and prosecute priority offenders; (2) dismantle violent gangs and criminal organizations; and (3) engage the community to act. As for the first component, priority offenders, known colloquially as “trigger pullers,” were individuals who had committed, were committing, or were most likely to commit a crime while using or shooting a firearm. By working together and utilizing their combined intelligence to identify the most significant “trigger pullers,” law enforcement agencies could efficiently allocate their time and resources to investigate some of the most dangerous individuals in the city.