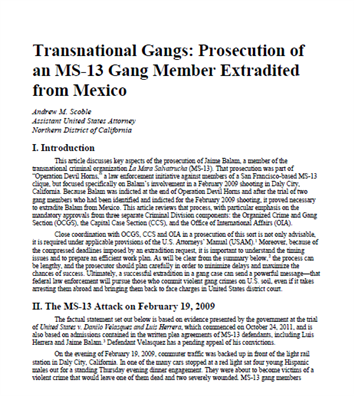 This article discusses key aspects of the prosecution of Jaime Balam, a member of the transnational criminal organization La Mara Salvatrucha (MS-13). That prosecution was part of “Operation Devil Horns,” a law enforcement initiative against members of a San Francisco-based MS-13 clique, but focused specifically on Balam’s involvement in a February 2009 shooting in Daly City, California. Because Balam was indicted at the end of Operation Devil Horns and after the trial of two gang members who had been identified and indicted for the February 2009 shooting, it proved necessary to extradite Balam from Mexico. This article reviews that process, with particular emphasis on the mandatory approvals from three separate Criminal Division components: the Organized Crime and Gang Section (OCGS), the Capital Case Section (CCS), and the Office of International Affairs (OIA).