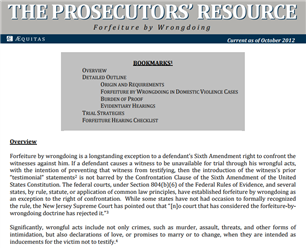 The Prosecutors' Resource: Forfeiture by Wrongdoing

Forfeiture by wrongdoing is a longstanding exception to a defendant’s Sixth Amendment right to confront the witnesses against him. If a defendant causes a witness to be unavailable for trial through his wrongful acts, with the intention of preventing that witness from testifying, then the introduction of the witness’s prior “testimonial” statements is not barred by the Confrontation Clause of the Sixth Amendment of the United States Constitution. The federal courts, under Section 804(b)(6) of the Federal Rules of Evidence, and several states, by rule, statute, or application of common law principles, have established forfeiture by wrongdoing as an exception to the right of confrontation. While some states have not had occasion to formally recognized the rule, the New Jersey Supreme Court has pointed out that “[n]o court that has considered the forfeiture-by-wrongdoing doctrine has rejected it.”