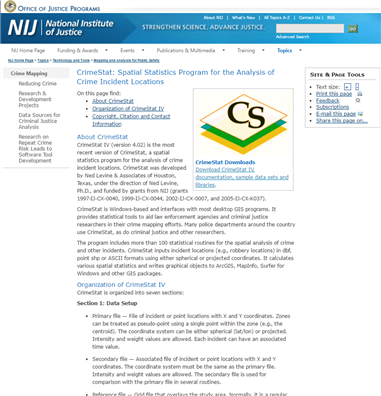 CrimeStat IV (version 4.02) is the most recent version of CrimeStat, a spatial statistics program for the analysis of crime incident locations. CrimeStat was developed by Ned Levine & Associates of Houston, Texas, under the direction of Ned Levine, Ph.D., and funded by grants from NIJ. CrimeStat is Windows-based and interfaces with most desktop GIS programs. It provides statistical tools to aid law enforcement agencies and criminal justice researchers in their crime mapping efforts. Many police departments around the country use CrimeStat, as do criminal justice and other researchers. The program includes more than 100 statistical routines for the spatial analysis of crime and other incidents. CrimeStat inputs incident locations (e.g., robbery locations) in dbf, point shp or ASCII formats using either spherical or projected coordinates. It calculates various spatial statistics and writes graphical objects to ArcGIS, MapInfo, Surfer for Windows and other GIS packages.