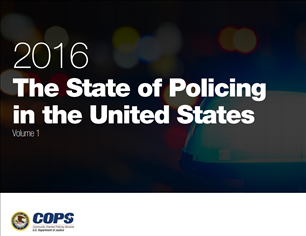 The State of Policing in the United States

One of the recommendations of the Final Report of the President's Task Force on 21st Century Policing was the delivery of an annual report on the state of American policing, which would provide an updated overview of events and changes in policies and practices, as well as their impact on police officers and the public. This inaugural report reviews law enforcement activities and developments from January 2015 to March 2016 and offers research and other resources for more in-depth analysis. Divided into three sections, the first part identifies the many ways in which the field was tested, including topics such as excessive use of force. The second section discusses community policing approaches and other strategies that police used to engage their communities and enhance public safety. The third section examines the impact of events and policies on law enforcement officers and their work.