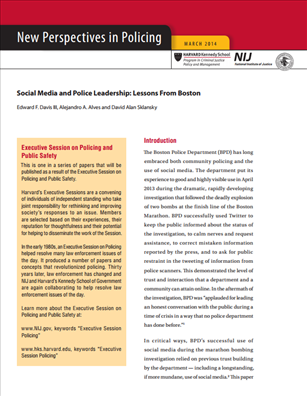 The Boston Police Department (BPD) has long embraced both community policing and the use of social media. The department put its experience to good and highly visible use in April 2013 during the dramatic, rapidly developing investigation that followed the deadly explosion of two bombs at the finish line of the Boston Marathon. BPD successfully used Twitter to keep the public informed about the status of the investigation, to calm nerves and request assistance, to correct mistaken information reported by the press, and to ask for public restraint in the tweeting of information from police scanners. This demonstrated the level of trust and interaction that a department and a community can attain online. In the aftermath of the investigation, BPD was “applauded for leading an honest conversation with the public during a time of crisis in a way that no police department has done before.”