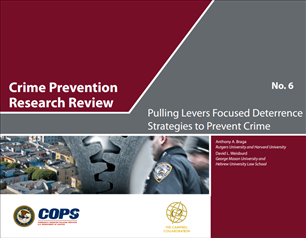 Deterrence theory posits that crimes can be prevented when the offender perceives that the costs of committing the crime outweigh the benefits (Gibbs 1975; Zimring and Hawkins 1973). Most discussions of the deterrence mechanism distinguish between general and special deterrence (Cook 1980). General deterrence is the idea that the general population is dissuaded from committing crime when it sees that punishment necessarily follows the commission of a crime. Special deterrence involves punishment administered to criminals with the intent to discourage them from committing crimes in the future. Much of the literature evaluating deterrence focuses on the effect of changing certainty, swiftness, and severity of punishment associated with certain acts on the prevalence of those crimes (Apel and Nagin 2011; Blumstein, Cohen, and Nagin 1978). This paper briefly reviews the research on the crime control effectiveness of pulling levers focused deterrence programs.