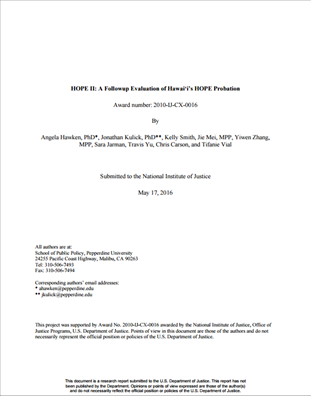 Hawaiʻi's Opportunity Probation with Enforcement (HOPE) relies on a regimen of regular, random drug testing tied to swift and certain, but modest, sanctions to motivate probationer compliance. In two 2007 studies in Hawaiʻi, a comparison-group quasi-experiment and a randomized controlled trial, HOPE was demonstrated to improve compliance with terms of probation at 12-month followup, with large reductions in drug use, recidivism, and overall incarceration for offenders assigned to the program. Following the original evaluations, HOPE expanded from 34 participants in 2004 to approximately 2200 participants in Hawai'i in 2014, with many replications on the mainland. Several important questions remained. The primary impact of drug treatment is felt during exposure to the treatment program; over half of treatment subjects relapse within a year of ending treatment. The original evaluations of HOPE relied on a relatively short followup period, and it is not clear whether its effects would persist over a longer period. And it is not clear whether implementation would maintain fidelity to the model when no longer being evaluated. This study extends the original HOPE evaluations to an almost ten-year followup, addressing whether the improvements in criminal-justice outcomes observed during the active HOPE intervention persist after the term of probation. The study also documents changes in HOPE practices and ongoing implementation fidelity to the model.