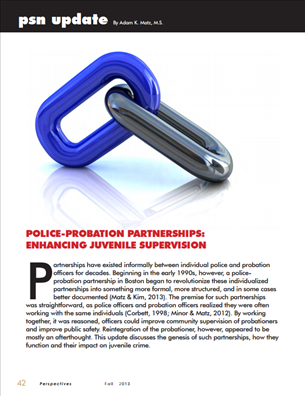 Partnerships have existed informally between individual police and probation officers for decades. Beginning in the early 1990s, however, a police-probation partnership in Boston began to revolutionize these individualized partnerships into something more formal, more structured, and in some cases better documented (Matz & Kim, 2013). The premise for such partnerships was straightforward, as police officers and probation officers realized they were often working with the same individuals (Corbett, 1998; Minor & Matz, 2012). By working together, it was reasoned, officers could improve community supervision of probationers and improve public safety. Reintegration of the probationer, however, appeared to be mostly an afterthought. This update discusses the genesis of such partnerships, how they function and their impact on juvenile crime.