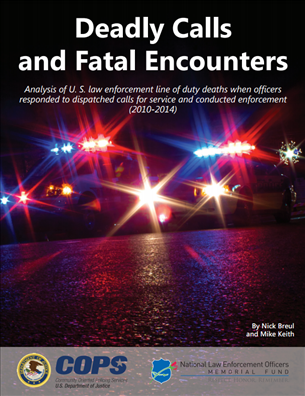 This report is a five-year study analyzing line-of-duty deaths in which a total of 684 cases were reviewed. Specifically, the analysis focused on cases that involved a dispatched call for service which required a police response and what information was made available to responding officers in the deadliest calls for service. Armed with this information, researchers were then tasked with determining if any commonalities existed that could be utilized as learning tools to prevent future deadly calls or fatal encounters. Some key findings from this report reveal that calls related to domestic disputes and domesticrelated incidents represented the highest number of fatal types of calls for service and were also the underlying cause of law enforcement fatalities for several other calls for service. In addition, researchers discovered that officers were slain with handguns in 71% of all cases studied and that in 45% of all the cases in which officers were responding to a dispatched call for service that ended in a fatality, the officers had been advised the suspect(s) might be armed, or had made prior threats.