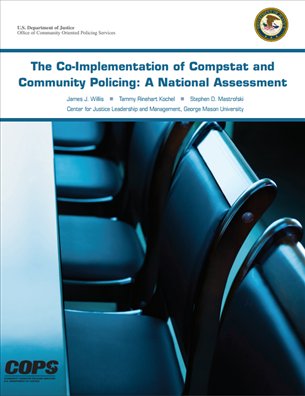 The Co-Implementation of Compstat and Community Policing: A National Assessment

This report presents findings from the first national assessment of Compstat (CS) and community policing (CP) as co-implemented reforms. Given that systematic research on the co-implementation of CS and CP is scarce, the first purpose of this project was to illuminate the current state of implementation of each reform in the United States and the nature and extent of compatibility problems. Thus, we begin by drawing on data from our national survey to provide a profile of CS and CP in large police agencies. The purpose of the profile is to show what local police departments were doing with each reform, why they decided to adopt them, what some of the differences were between co-implementing and CP-only departments, and what some of the benefits and challenges were that arose from operating both reforms simultaneously.