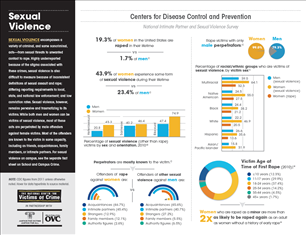 Sexual Violence encompasses a variety of criminal, and some noncriminal, acts—from sexual threats to unwanted contact to rape. Highly underreported because of the stigma associated with these crimes, sexual violence is also difficult to measure because of inconsistent definitions of sexual assault and rape; differing reporting requirements to local, state, and national law enforcement; and low conviction rates. Sexual violence, however, remains pervasive and traumatizing to its victims. While both men and women can be victims of sexual violence, most of these acts are perpetrated by male offenders against female victims. Most of the offenders are known to the victim in some capacity, including as friends, acquaintances, family members, or intimate partners.

Author: The National Center for Victims of Crime

Provider: The National Center for Victims of Crime