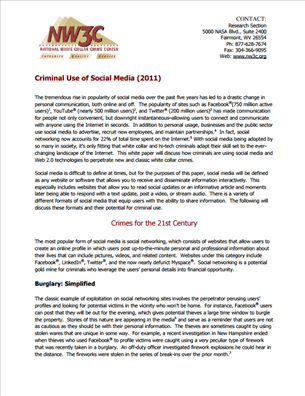 Criminal Use of Social Media

The tremendous rise in popularity of social media over the past five years has led to a drastic change in personal communication, both online and off. The popularity of sites such as Facebook®(750 million active users), YouTube® (nearly 500 million users), and Twitter® (200 million users) has made communication for people not only convenient, but downright instantaneous-allowing users to connect and communicate with anyone using the Internet in seconds. In addition to personal usage, businesses and the public sector use social media to advertise, recruit new employees, and maintain partnerships. In fact, social networking now accounts for 22% of total time spent on the Internet. With social media being adopted by so many in society, it's only fitting that white collar and hi-tech criminals adapt their skill set to the everchanging landscape of the Internet. This white paper will discuss how criminals are using social media and Web 2.0 technologies to perpetrate new and classic white collar crimes.