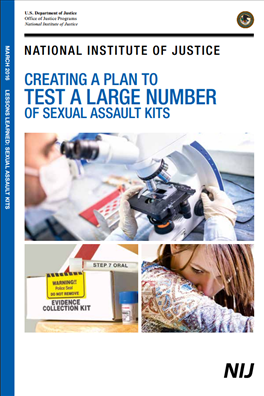 Many jurisdictions across the country are looking at the issue of sexual assault evidence that has not been submitted to a crime lab for testing. As part of an NIJ-supported project, the Wayne County (Detroit), Mich., Prosecutor's Office formed a multidisciplinary team to address the issue. On the team were practitioners who deal with sexual assaults every day — police officers, crime lab analysts, prosecutors and victim advocates — as well as social science researchers from Michigan State University (MSU). The MSU researchers were led by Rebecca Campbell, Ph.D., a nationally recognized expert on sexual assault. Dr. Campbell's work with the Detroit multidisciplinary team followed an "action-research" model. First, the team worked collaboratively to understand the scope of the issue: How many sexual assault kits (SAKs) in police custody had never been sent to a crime lab for testing, and how and why did the problem develop? Then, the team identified effective, sustainable responses. One such response was developing a plan for testing a large number of previously untested kits. Here are 14 lessons that the team learned in the Detroit project.